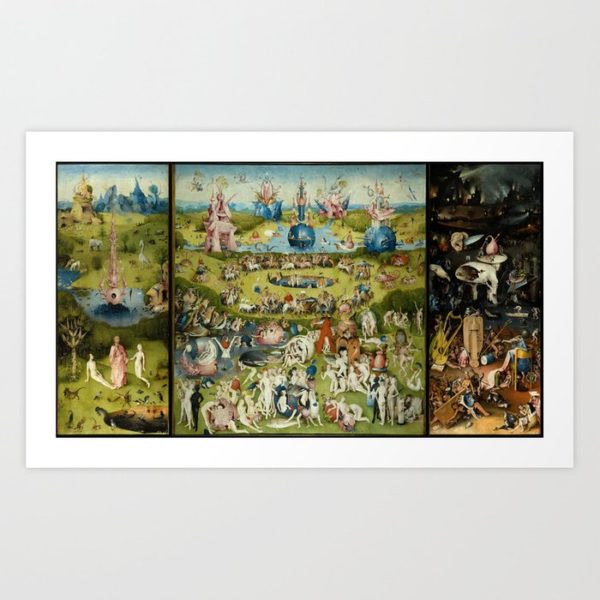 Hieronymus Bosch The Garden Of Earthly Delights (1500)
The Garden of Earthly Delights is the modern title given to a triptych painted by the Early Netherlandish master Hieronymus Bosch. Dating from between 1490 and 1510, when Bosch was about 40 or 50 years old, it is his best-known and most ambitious, complete work. It reveals the artist at the height of his powers; in no other painting does he achieve such complexity of meaning or such vivid imagery. The triptych is painted in oil on oak and is formed from a square middle panel flanked by two other oak rectangular wings that close over the center as shutters. The outer wings, when folded, show a grisaille painting of the earth during the biblical narrative of Creation. The three scenes of the inner triptych are probably (but not necessarily) intended to be read chronologically from left to right. The left panel depicts God presenting Eve to Adam, the central panel is a broad panorama of figures, fantastical animals, oversized fruit and hybrid stone formations. The right panel is a hellscape and portrays the torments of damnation.

error: Content is protected !!
We use cookies to ensure that we give you the best experience on our website. If you continue to use this site we will assume that you are happy with it.Ok